Scale Armor is a type of armor that has been around for a very long time. It is constructed out of scales. These scales are basically small plates usually made of a variety of different materials. They were often made of metals such as bronze or iron. They were also made from organic materials such as leather, pangolin scales, and other things. These would be connected together in overlapping rows. The scales would also be attached to a backing which was commonly made of either leather or cloth. Sometimes they were connected using rivets. Other times they would be laced together. The rows of scales would end up looking like the scales of fish or a dragon. 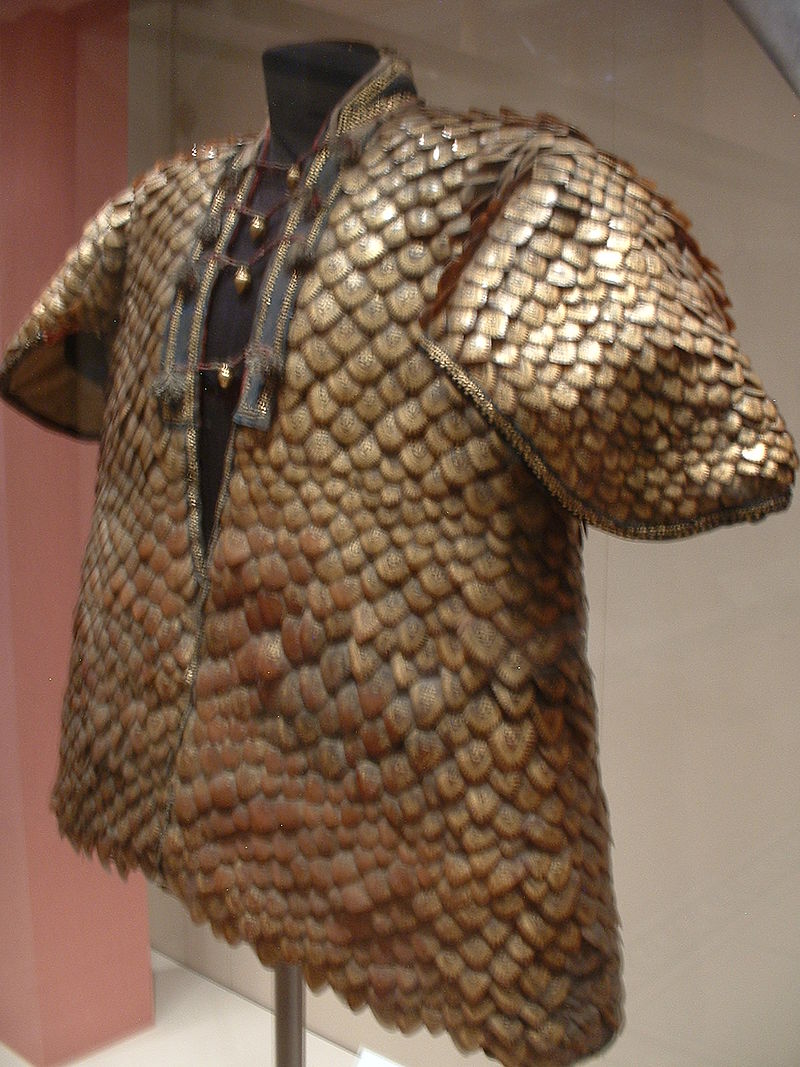 Scale armor was is used across many different cultures in many different parts of the world. It has been in use for thousands of years. It was widely used in the middle east. It has known notable popularity in Persia. Its use extends all over the world including As far as eastern Asia.

We should start off by making it clear that the term scale mail is a misnomer. It should be referred to as scale armor. It isn’t really a type of mail. I’m going to go ahead and just use both terms interchangeably because I can.

Note that the term “chain mail” is also a misnomer. It should actually just be called mail. My understanding is that during the Victorian era, people started referring to all armor as mail and thus needed to refer to actual mail as “chain mail” just to differentiate it. Many people still use this term today. The correct, more accepted term is just “mail”. It can also be spelled “maille”. The term is believed to derive from the Latin term “macula” which is basically a descriptive term for the type of armor.

There is another distinction that should be made. You don’t want to confuse scale armor with lamellar armor. Scale armor is composed of a number of scales that are attached to a base garment (usually cloth or leather). Lamellar is kind of similar but it is not connected to any type of base garment. It is composed almost entirely of scales that have been connected together. I often see people referring to lamellar as scale armor. This is most often because the well known term is more descriptive people don’t know the difference. Many people not only don’t know the difference but don’t even know that the second term exists. The would just as well group both types together.

It provides more protection against bludgeoning when compared to mail (chain mail). It can provide better protection against piercing attacks, so long as these are not from an upward thrust. It is also cheaper to produce than many other types of armor. Cost effectiveness is an important thing to consider when choosing armor. This is particularly true if you planning to equip an army of soldiers with matching armor. The costs add up quickly and you need to make sure you have enough to provide armor for everybody.

Scale armor definitely has its drawbacks. For one, it doesn’t really protect against an upward thrust. An attacker could slip a blade or spear under the scales. It is possible for it to be constructed in such a way as to decrease this risk significantly though. You certainly won’t find it to be as flexible as mail. Its actual level of flexibility will depend on the size of the scales and on the quality of craftsmanship used to create it. Armor made from smaller scales will be more flexible than when it is made with larger scales.

Scale armor was no where near as popular as mail armor. Scale was used by the Romans but they still preferred either mail or plate armor. Definitely in Medieval times, scale was less important because mail and plate were so much more practical.

Scale armor was used by Roman troops. This was called "lorica squamata". The scales of this specific type of scale armor would be made of iron, bronze, or both (alternating). They would be sewn to a fabric backing. In rare cases, a type of mail would actually be used as the backing. This provided another extra layer of defense. The downside to this is that it would be heavier and the soldier wearing it would have more weight to carry.

This is basically normal scale mail or lamellar except that it is made using dragon scales. It isn’t just made to resemble the scales of a dragon. You need real actual dragon scales to construct a proper set of dragon scale armor. This is where scale armor starts to become way better than other types of armor.

Scale armor is very popular within the context of modern LARPs. This is because it looks so cool. It has a great deal of decorative value which makes it all that much more desireable in a fantasy games. Who doesn’t want an awesome set of scale armor. It is more elaborate and possibly more “fancy” than simple plate armor. It turns out it is easier to construct too. So, if you want to really great set of gear for a minimal amount of effort, this is a great way to go. It is a whole lot easier to build than plate armor and the individual scales give it a look that is hard to beat. If you are new to constructing your own armor, this is an easy place to start. I’ve seen LARPers create scales out of leather and metal. It is easier to make a good looking set out of leather. It can be easily shaped and worked however you like. It is also easy to dye leather scales any color you want for a great set of fantasy armor. Lighter metals won’t look as good, especially around the edges. If you can make it out of something heavier, like relatively thick pieces of steel, it will probably look pretty decent. If you can do that and make sure to smooth the edges and color it, this will probably give you the best results but will also take the most effort.