I’ve chosen to group these three weapons together since they are some what related and I thought they would all fit well together in one article. Often times people will confuse a mace, a flail, and a morning star. Mace is relatively common weapon for people to use in LARPs. The morning start is less common but still not at all rare. An actual flail ( or at least a well constructed flail ) is relatively rare in LARP adventures. This is because it is relatively difficult to construct, especially compared to a standard mace. As always I like to cover each weapon’s historical background as well as its use in gaming and fantasy context.

A mace a popular weapon for practical reasons. It is easy to construct and the costs are relatively low. A mace is a type of club with a heavy head secured to the end of a handle. Typically ( but not always ) the head would be made of metal and the handle would be crafted out of wood. The handles of later versions were more often constructed using metal. The head of a mace may or may not have either flanges or knobs. A variation of this weapon called a flanged mace is basically just a mace that happens to have flanges on the head. A mace is often used to cause damage against chain mail or other metal armor that would otherwise be difficult to penetrate with sharp edged weapons. The damage dealt will vary depending on the particular mace and on the armor worn by the person being struck. Sometimes it would just cause a dent which still causes damage to the target. Other times the edges could actually penetrate the armor. 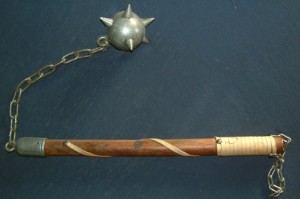 A flail could refer to either one of two different weapons, both of which have many different styles and variations. The two main flail weapons are the single handed flail and the two handed flail. Both types were helpful in that they could deliver great force against armored advesaries. They also have the advantage of being able to read around or wrap around shields. They are both based on the same idea of a handle with a spiked bar or spiked ball connected to the end with either a joint, chain, rope, or some type of strap.

The first type of flail is the two handed flail. This is an infantry weapon which is based on a farming tool that was original ( and still is ) used to thresh grain. While they obviously have a longer handle, these weapons also tend to have a shorter connector and a longer ball/bar on the end. While these are basically improvised peasant weapons, they are usually modified which does take some extra time and work. They are usually modified by adding studs or spikes. These would often be used in rebelions and by militias. While they can be inaccurate and are difficult to use at close range, they are great against a shielded opponent.

The second type of flail is the one handed flail. It is less based on agricultural tools and more purposefully designed for combat. This variation will of course have a shorter handle. It also usually has a much longer chain. On the end of the chain you are more likely to find a spiked ball instead of a spiked bar. This weapon is great against both armor and shields. It has the potential to build up a lot of momentum delivering blows with great force. Besides affectiveness in battle these also have the advantages of both intimidation and distraction. This weapon will easily strike fear into openents giving the wielder an added advantage. 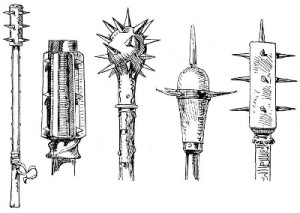 A morning star is a type of club with spikes protruding from the head. There is typically one single large spike on top and smaller spikes around the head. It is much like a mace but is a distinct type of weapon. What distinguishes a morning star from a mace is that a mace will have either flanges or knobs but a morning star has actual spikes. Unlike a mace, the morning star almost always includes a wooden handle. People did not start crafting the handle from metal with this weapon.

The main idea behind how this weapon is used is to cause two types of damage. On the one hand it causes blunt-force smashing damage. On the other hand it can cause puncture damage. For both of these reasons it is great against armor and against knights on horse back.

Many people mistakenly assume that the morning star is a crude weapon and that it is primarily used by peasants as opposed to knights or trained soldiers. It is very important to note that there is more than one type of morning star and that they differ in quality and purpose.

One type is purely decorative and is used for ceremonial purposes. This would have most intricate design and would obviously not be used for actual fighting. This is for the most part the opposite of a peasant weapon.

The second type is a functional weapon actually used in battle. This is a well built professional grade weapon that has been expertly crafted for military use. These would be built, usually in bulk, by a professional weapons smith. This type of morning star is used by trained professional soldiers.

There is another type which has a more simple construction. This type was commonly used by militias. This would have a hand cut wooden base and would use whatever could be obtained as spikes. These would usually be spikes forged by the local town blacksmith.

The goedendag is basically a spear and club combination. The goedendag is mainly used to take out knights. These were great when used against horses and against the actual knights themselves. These were initially created and put to use by militias and often used to fight against invaders. They are seen as not being meant for professional soldiers as there are better ( yet more expensive ) alternatives for taking out knights ( ex: halberd or morningstar ).